One of the basic principles of economics is – “Never reason from a price change.”

But we do it nonetheless. A stock which is down 60% is considered cheap – selling at a discount. A high Mutual Fund NAV is considered expensive – selling at a premium so to say. Neither needs to be true, and neither is a good strategy to buy or sell. Indeed penny stocks can bankrupt you quickly and direct plans of Mutual Funds have higher NAV because of accumulated gains due to higher returns than regular plans and are good for you.

The most extreme example of inferring from a price change is when we claim that an asset is in a bubble. It simply means that an asset has appreciated in value very quickly – maybe 5x or 10x of what it used to be. An asset repricing so extreme that in hindsight it seems almost impossible to imagine someone was still buying. But during the frenzy, there are many more waiting to buy in fear of missing out on spectacular gains. And lest you think the smart avoid this frenzy easily, it will help to revisit Newton’s example and his investment in the South Sea company. That investment bankrupted Newton. A chart of Newton’s investing borrowed from Marc Faber via Telegraph looks like this: 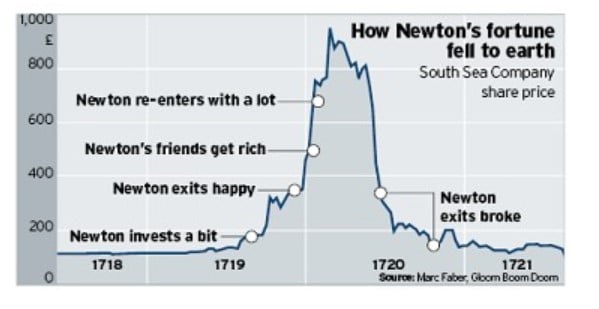 After the episode Newton famously proclaimed

I can calculate the movement of the stars, but not the madness of men.

In recent times, the word “bubble” has been used for bitcoin’s rally and crash in 2018, or for Tesla’s price rally post-Mar 2020. Or more recently a penny stock going up 4300% and the company doesn’t even have any revenues.

And they might well be bubbles. But the word is grossly overused and bubbles are only known in hindsight. As Prof Fama of the University of Chicago points out that spotting and predicting bubbles are a fool’s errand. Research supports Prof Fama as well. In their 2017 paper cheekily titled “Bubble for Fama”, Greenwood, Shleifer and You note

We evaluate Eugene Fama’s claim that stock prices do not exhibit price bubbles. Based on US industry returns 1926-2014 and international sector returns 1985-2014… Fama is correct in that a sharp price increase of an industry portfolio does not, on average, predict unusually low returns going forward.

They do note however that a sharp price increase does predict a substantially heightened probability of a crash, but timing it is not easy. Take the most famous case – Alan Greenspan called the dot-com bubble as early as 1996 when he famously coined the term “irrational exuberance”. Any investor who would have heeded that advice and sold all their stocks would have missed out on 4 years of spectacular rally till mid-2000 that saw the S&P 500 almost doubling since 1996.

In fact, it would be fair to say that experts have called 10 of the last 2 bubbles (sic) correctly! Pretty much the same record they have in calling recessions or bear markets. In one such experiment in the faculty lounge at Stanford, professors were shown charts of agriculture prices and asked to identify if any were bubbles. The charts were randomly generated but still, they saw patterns in them.

The truth is somewhere in the middle. Prices do move too much – one way or the other. In hindsight, they may seem wrong as well.  But that does not mean those movements have any predictive value on future price moves. Bitcoin, for example, fell from ~USD 20k down to ~ USD 3k only to bounce back to over USD 11k today. Drawing an inference from price would have led the investor astray multiple times.

So where does this leave us? Next time someone says, “tech stocks are in a bubble”, “gold is in a bubble”, “bitcoin is a bubble” etc then remind them of this. Realise that all they are saying is that the price has run up too much too soon.  And what we have learnt today is that we should never reason from a price change. Price changes don’t tell you anything on what will happen in the future.

Check what happened in different markets this week here.

1/ YES Bank has signed an agreement with GPL Finance and Investments (GPLFI) to sell 100% stake of it’s Mutual Fund business.

Money is a public good; as such, it lends itself to private exploitation.