Gaurav here [GR] – Kuvera is where the smart investors are. Some such investors have formed a collective – “The Watchmen”.

Inspired by the comic book, this is a collective based on the scientific method – to test all hypothesis and let the data speak. A true ‘watchmen’ against all that is passed as investing advice.

One of the most common mistakes that investors do when it comes to investing is to chase past performance. Most investors sort mutual funds based on past 1 year, 3 years or 5-year returns and pick the top-performing funds in one or more of the above categories. A lot of distributors do the same as it is an easy sell.

While choosing mutual funds based on past performance may seem like a remarkably simple and intuitive way of assessing the mutual funds, there is enormous empirical evidence, that there is little persistence in the past performance. This implies that there is a good chance that the best fund(s) based on past performance today may not be the best fund(s) one or two years later. Very few investors constantly monitor their investments and even for those who do monitor their investments, chasing of best funds then becomes a never-ending ritual. To make things worse, almost all the commercial mutual fund distributor platforms and online advisors show a star rating system that is supposedly designed to help the investors choose the “best” funds.

How do they assign star ratings? You may have guessed it right – Past performance. [GR: ratings don’t work either. See here]

Let us imagine a fictitious investor “Appu” who decided to invest in mutual funds.

He logs in to his favourite mutual fund portal. He sorts the funds based on past 1-year performance and decides to invest in the top 10% of the funds. Now a year later, what percentage of those funds do you think still remain in the top 10%? Ideally, he would hope to see 100% of his funds continue to be the best. But what percentage do you think he is likely to see in reality?

We ranked all the “Regular growth equity” mutual funds into deciles (10 equally sized groups) sorted by their past performance*. We looked at three different past performances – 1 year, 3 years and 5 years. Then we tried to emulate Appu, our typical investor’s behaviour. Appu would pick his funds from the winning decile – the group of funds that ranked in the top 10% in terms of past performance. We then calculated what percentage of funds continued to remain the same decile group or moved to different decile groups just one year later based on the one-year realized returns (i.e the returns investors would have earned 1 year later).

So, let’s see how Appu’s fund did. Appu invested based on the best 1-year past performance. 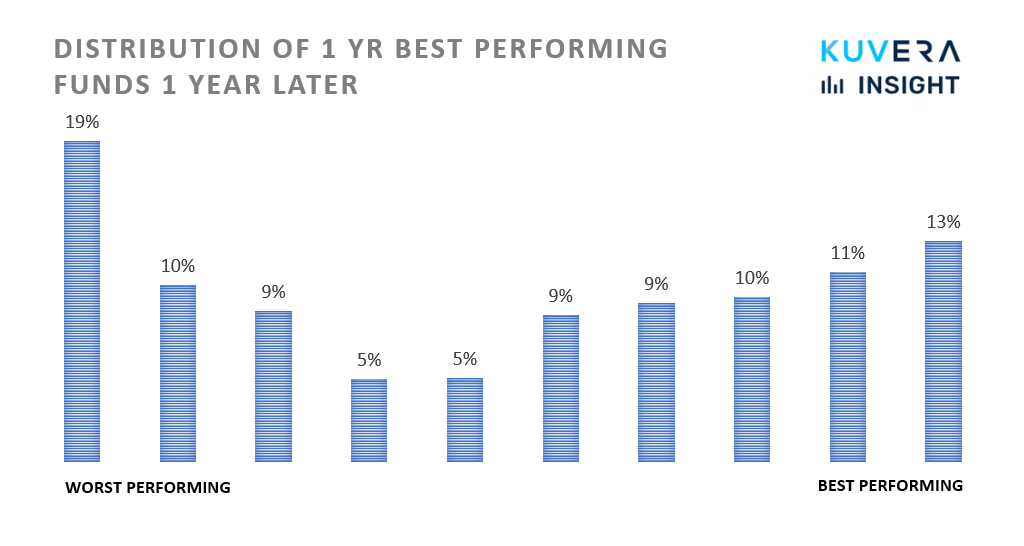 Let’s spend some time on this chart because what it says is nothing short of revolutionary.

3/ Only 52% of the best performing funds based on 1 year past data continue to be in the top half of the funds by performance 1 year later.

Let that sink in. 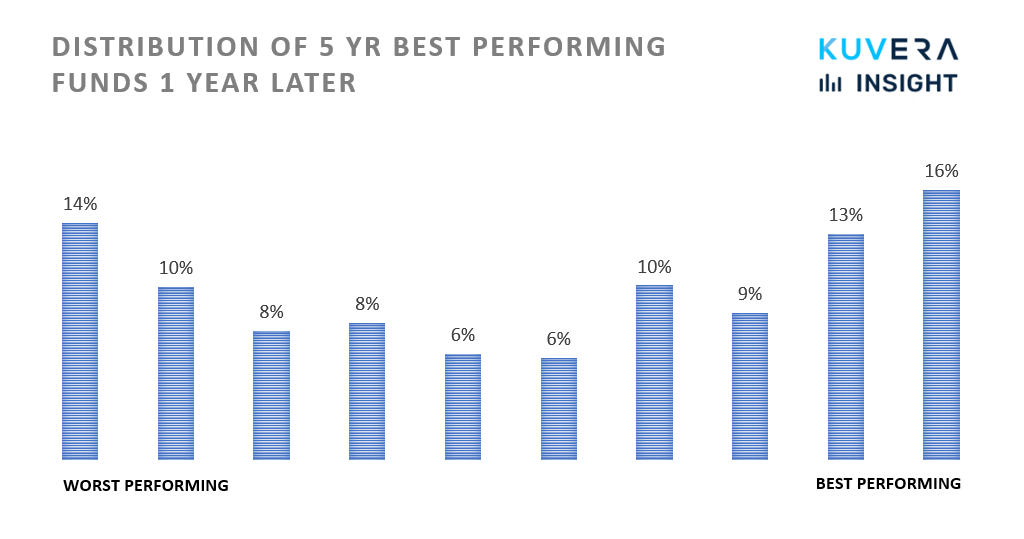 Not much to see here either. “Consistent performance” – ah now that’s another myth that’s busted. We would show you the 3-year data as well, but trust us it is more of the same. Won’t bring any comfort to your sore eyes. 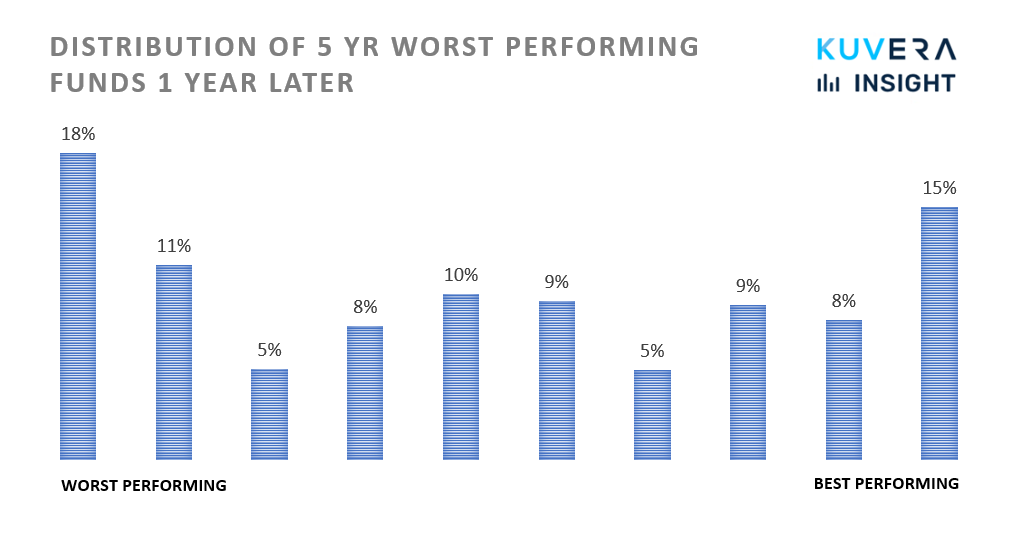 Guess what, we might have just thrown darts and picked the funds or you know done the smart thing and invested in index funds and saved time.

In a nutshell, there is truly little persistence in rankings. Based on past 1-year performances, more of the best funds end up in the worst (loser) decile (nearly 19%) than those that remain as winners (nearly 13%). Nearly 15% of the funds that belonged to the loser decile ended up in the winner decile just a year later. Persistence seems to be slightly stronger in the loser decile than in the winner decile. Around 1% of the loser funds disappeared in the subsequent year. Remarkably similar patterns can be observed in the 3-year and 5-years lookback periods.

What we saw is average data across years. Even on a year on year basis the persistence for both winner and losers reaches at best 20%. What it implies is that at best only 1 in 5 of the funds that an investor picked based on past performance is likely to remain best and the other 4 can potentially be bad, worse or the absolute worst.

Carhart concluded the same in the US mutual fund universe. And guess what it applies equally to all kinds of active management – hedge funds, PMS, thematic baskets, ETFs etc etc… you get the drift!

We downloaded the entire AMFI return data set going back to 2003. That’s 16 years of data. Every year we look at the entire universe of funds and divide them into 10 groups (called deciles) based on past returns. We use three parameters for past returns – 1-year past return, 3-year past return and 5-year past return. Each group will have 10% of the total number of funds. Then we look at the top 10% best performing funds in that year, i.e the top decile and see where the funds in that decile end up a year later. We repeat this exercise every year to see where the top 10% of funds based on past performance end up one year later. The data shown in the charts averages across all such annual experiments to arrive at expected values.

Investing 101 Investment Advisor
What Are Corporate Bond Funds, and How Do They Work?

Corporate bond funds are debt funds that invest primarily in corporate bonds with the highest...

Investing 101 Investment Advisor What Are Corporate Bond Funds, and How Do They Work?

In this video by Franklin Templeton India, you will get to know about...

In this video by Franklin Templeton India, you will learn about the...