Nishant is associated with capital markets since 2005. In his recent role, he was managing the portfolio of an HNI as an employee. Nishant is an aspiring fee-only financial planner who intends to start an affordable fee-only advisory after getting the licence from SEBI.

SEGREGATION OF PORTFOLIO & ITS TAXATION

So, what is segregation in mutual funds?

Simply put, it allows an open-ended scheme to quarantine a bad asset in a side cart portfolio allowing fair treatment to all unitholders and deal with liquidity risk. Let’s us understand with the help of a hypothetical scheme with the following details: 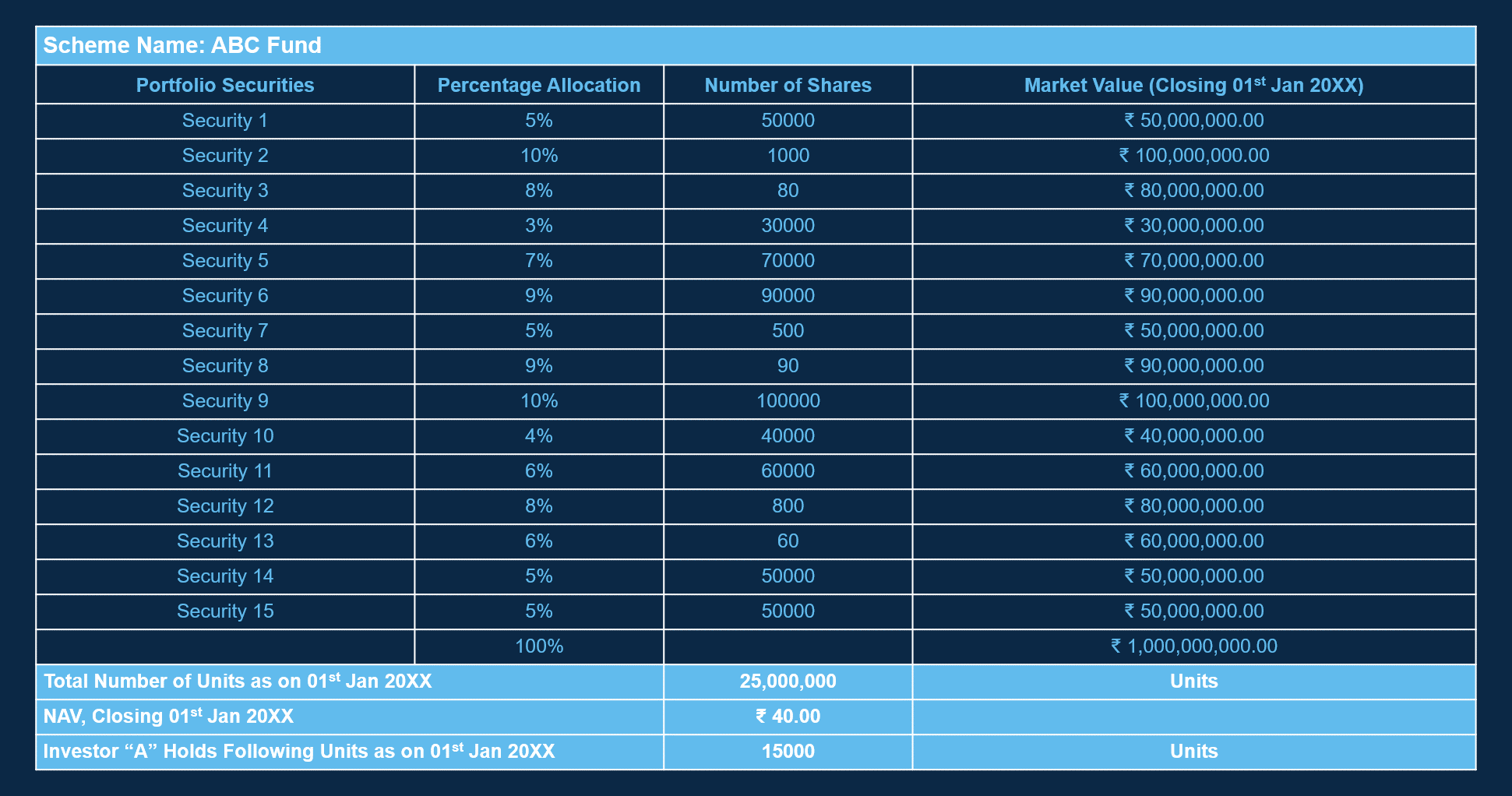 Let us now consider that “Security 9” has been downgraded to below investment grade by rating agencies on 02nd Jan’20XX and fund house decided to mark it down by 50% (this number is decided by credit rating agencies, although valuation committee of the fund house may take more conservative stance) and segregate this from rest of the portfolio. Now the portfolio will be divided in two-part, one is the main portfolio and other is a segregated portfolio, this is how the portfolios will look: 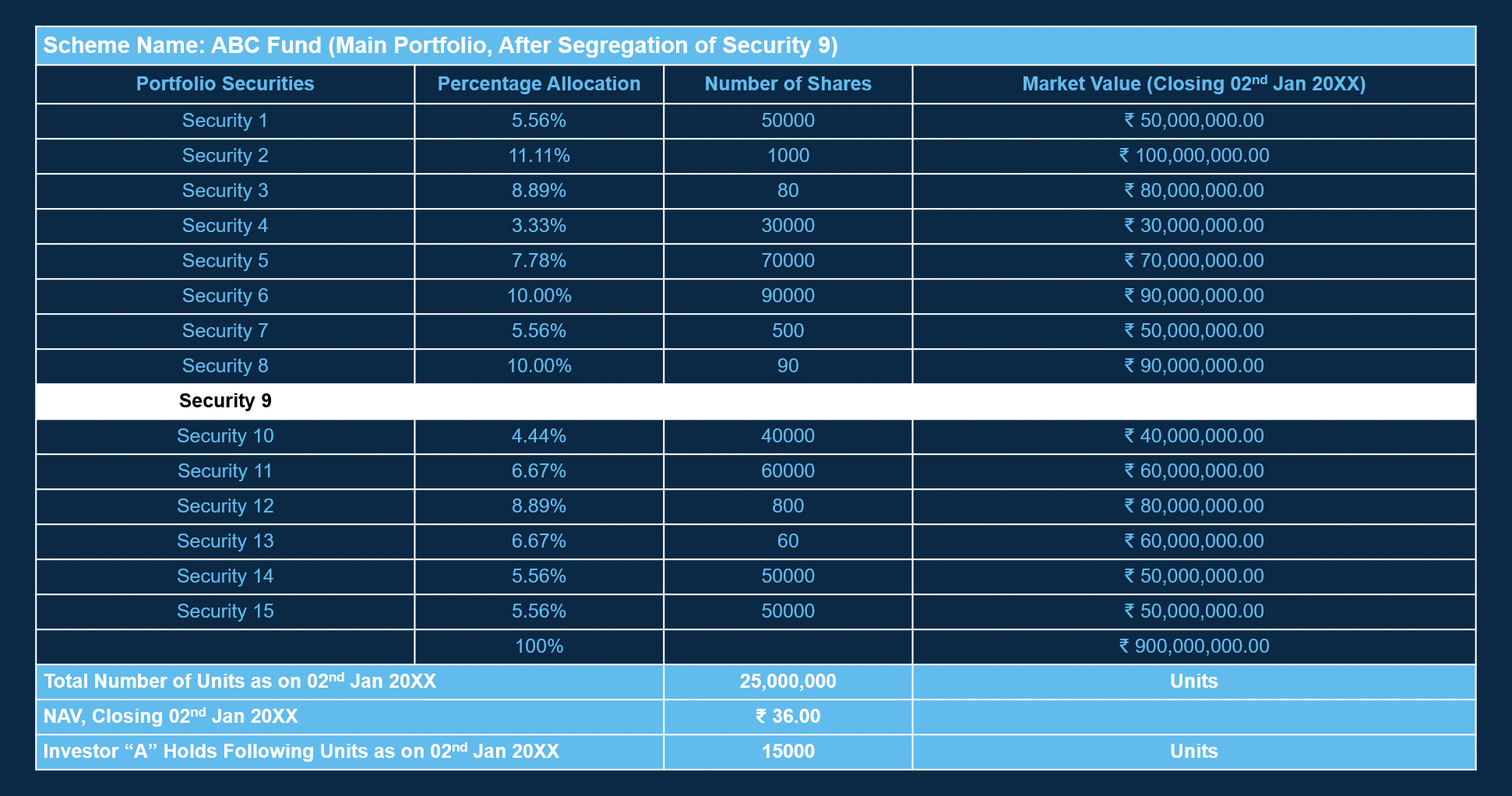 If you observe, Security 9 has been removed from the portfolio and has been side pocketed in a segregated portfolio (below image). In the above image, the percentage allocation to other securities has also been changed.

The impact on NAV is limited to 50% (Mark to market, only on security 9) on account of a downgrade. On the day of segregation, the existing investors in addition to the existing units would also get new units of the segregated portfolio in proportion to the units held by each investor.

As on 31st July’2015, JPMorgan India Short Term Income Fund & JPMorgan India Treasury Fund had exposure of 15.37% and 5.29% respectively to Amtek Auto Limited which was due for maturity on 20th September’2015 (INE130C08059). On 07th August’2015, CARE Ratings suspended its rating “as the company has not furnished the information required by Care for monitoring of the rating,” credit rating agency said in a statement. On 27th August’2015, rating agency (Brickwork) downgraded the rating to BWR C (from BWR A+) and schemes took a hit of 3.38% (JPMorgan India Short Term Income Fund) & 1.73% (JPMorgan India Treasury Fund) in just one day. In the general interest of all the unitholders of affected schemes (Treasury Fund and Short-Term Income Fund), effective 28th August’2015, the trustees decided to limit the redemptions in the two schemes to a percentage limit not exceeding 1% of the total number of units outstanding on any business day. On 14th September’2015, trustees sought approval of Unit Holders of the respective Schemes by simple majority, through postal ballot, to segregate the assets held by the respective Schemes, comprising of single security (Amtek Auto Limited) that is no longer investment grade and is currently illiquid in the Market. On 20th September’2015, Amtek Auto defaulted on payment of its bond. In the meantime, the process for the postal ballot was on and unitholders approved the segregation and Amtek Auto was segregated on 28th September’2015. This is the first-ever segregation in the history of the Indian Mutual Fund industry. On 5th December’2015, AMC sold the segregated bond to a vulture fund at a discount of 16.8% of the face value. Fund was carrying these bonds in the segregated portfolio at approx. 75% of the face value.

SEBI rejected the side pocketing proposal in 2016

SEBI allowed segregation of portfolio in 2018

After the fallout of IL&FS in September’2018 and subsequent volatility in the debt and money market instruments issued by NBFCs and HFCs had resulted in redemption pressures in debt mutual fund schemes. During this period, it was observed that a credit event in even one issuer/group could lead to significant liquidity risk in the entire industry which in turn can lead to further volatility in the market. Accordingly, AMFI submitted a proposal for side pocketing to the regulator on 05th October’2018. SEBI came out with circular on side pocketing on 28th December’2018.

Money market and debt instruments can be segregated, on trigger of credit event at issuer level by SEBI registered credit rating agency (in case of difference in rating by different CRA, most conservative is to be considered):

Unrated securities do not mean that the security is poor and cannot have a rating, it simply means that the issuer has decided not to pay a credit agency or the assessment of rating.

As in case of rated securities, the trigger is defined as credit even i.e. downgrade below investment grade (including subsequent downgrades and default) but for unrated security, mechanism is for actual default as these securities are not covered by Credit Rating Agencies.

Therefore, segregated portfolio of unrated debt or money market instruments may be created only in case of actual default (of interest or principal or both).

Process for creation of a segregated portfolio 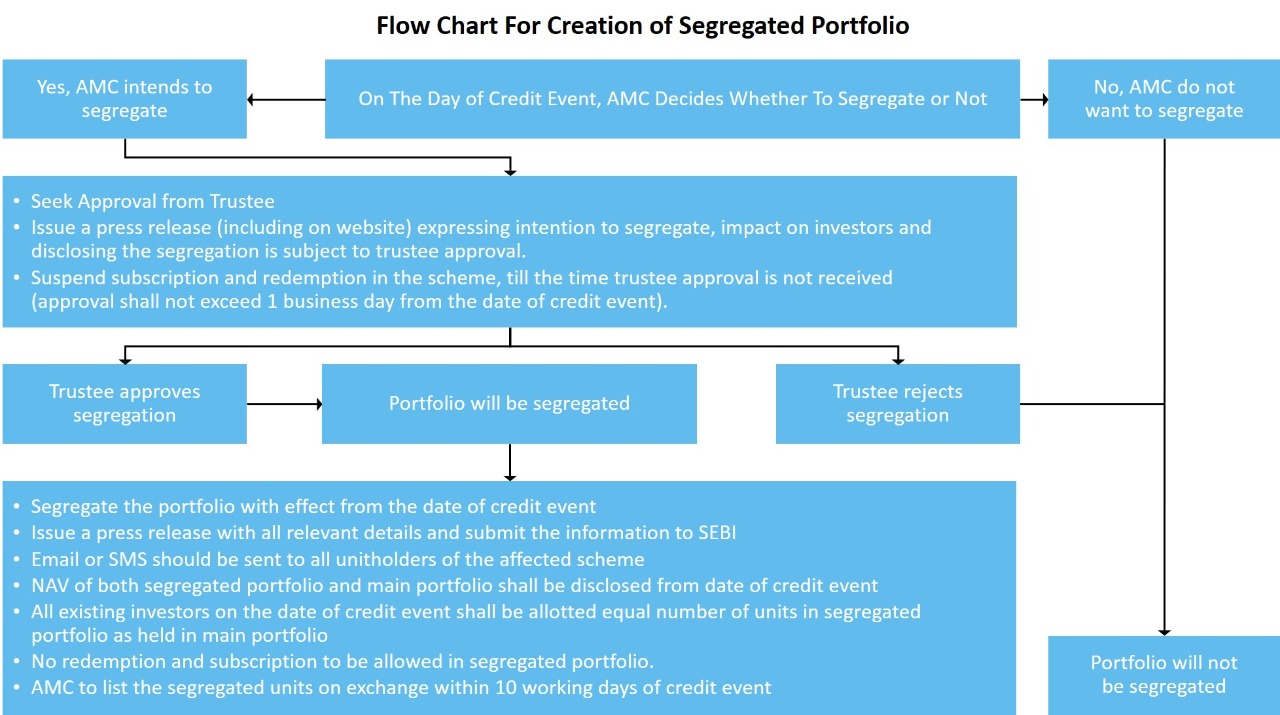 Please note segregation is not mandatory and is at the discretion of AMC provided Scheme Information Document (SID) has provisions for the segregated portfolio.

All new schemes launched on or after 07th November’2019 must have the provisions for segregation included in the SID. Schemes which currently do not have provisions for segregation in the Scheme Information Document (SID)/Key Information Memorandum (KIM) (referred to as “Offer Documents’) can introduce the same in the Offer Documents and as this change is considered a change in fundamental attributes of the scheme, intimation to all unitholders has to give with a load free exit window of 30 days. Because of this load free exit window, many of the AMCs are not enabling segregation clause in their offer documents. Exit load will be zero in this window, taxes will be applicable as per holding period of the unitholder.

After the SEBI (Mutual Funds) (Second Amendment) Regulations, 2012, with effect from 01st October’2012, exit load charged, if any, are credited back to the scheme.

In the below table, I have covered all the segregation which have happened till date, Tata Mutual Fund became the first adopters of provision laid down by SEBI in December’2018 when DHFL was downgraded to DEFAULT in June’2019. Tata AMCs three open-ended schemes were exposed to DHFL and the exposure to DHFL was segregated in these funds:

Before the changes made in Budget 2020, segregated portfolios were being cost at zero and holding period was reckoned from the date of segregation and not the date of the original acquisition of units.

Some random thoughts on segregation

Segregation in a Fund of Fund structure 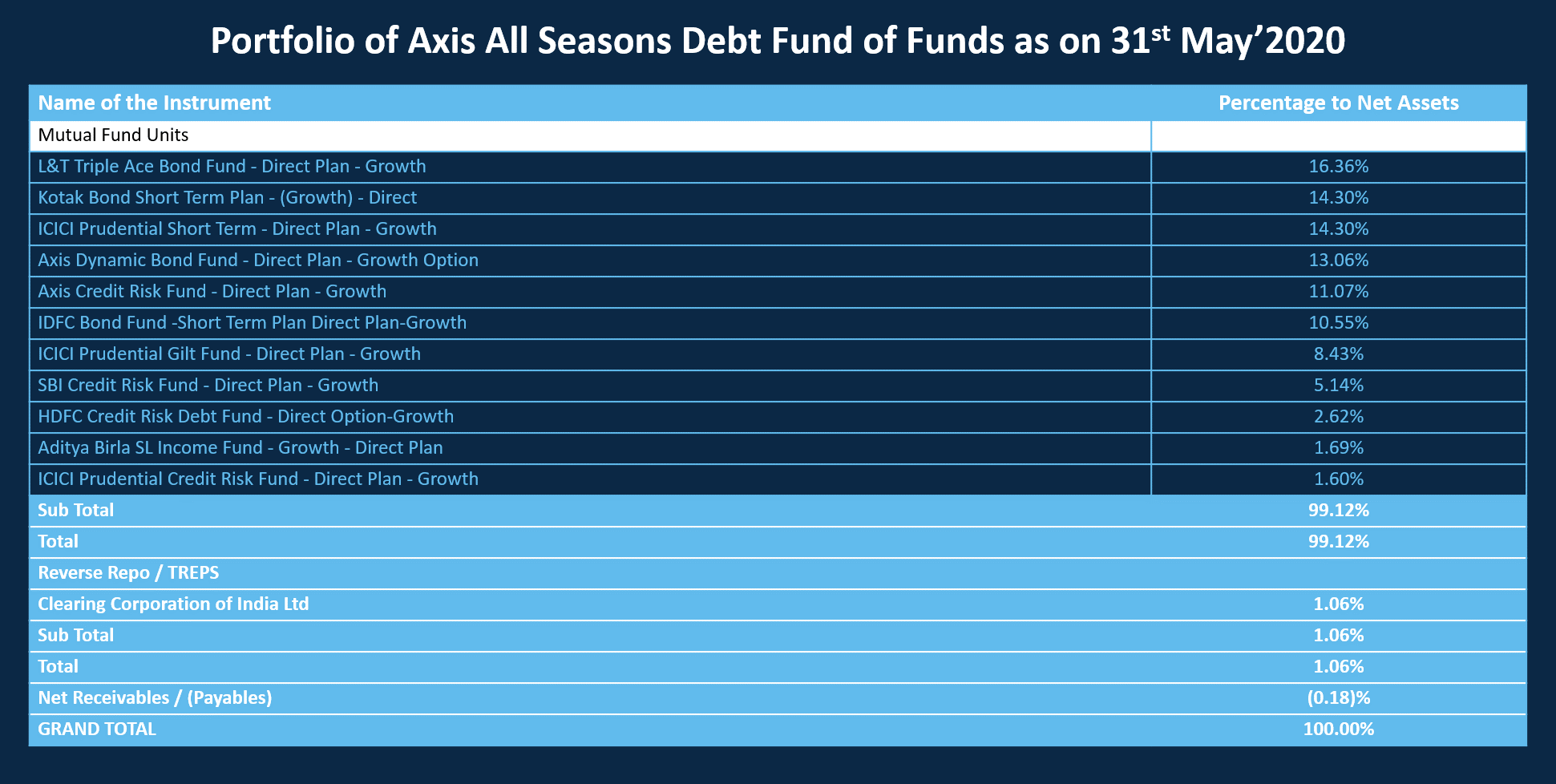 In case AMC chooses to segregate the bad assets on the day of a credit event, it comes with implications. Even if there are complete recoveries from the issuer, the same will not affect the rankings and performance of the main portfolio and on the ranking chart, the scheme will look inefficient. For example, if we look at the case of UTI Credit Risk Fund, it has three segregations, Altico (13th September’2019), Vodafone Idea Limited (partially marked down in the scheme on 17th January’2020 and finally segregated on 17th February’2020) and Yes Bank (on 06th March’2020). Let’s assume for the sake of discussion that UTI AMC is able to recover all the monies due from issuers held in these segregated portfolios then also the performance of the main portfolio will look pathetic as compared to peers because the recovery in a segregated portfolio will not have any effect on the NAV of the main portfolio (but NAV of the main portfolio was affected on the date of segregation, look graph).

Number of Segregated Portfolios in a scheme

There is no capping on a number of segregated portfolios in a scheme, if the need arises, a fund house can do as many segregations as required (subject to fulfilment of trigger conditions and approval from trustee within 1 working day of credit event). Segregation can be done on issuer level or ISIN level, Franklin Templeton AMC chose to segregate Vodafone Idea Limited on ISIN level whereas UTI AMC decided to create segregated portfolios at the issuer level.

Investing 101 personal finance
What is Inflation?

Consumers’ cost of living depends upon the price of each good and the service they purchase. The...

Investing 101 personal finance What is Inflation?

To be successful in the stock market, investors perform technical analysis to study a stock's...

International mutual funds have grown in popularity among investors in recent years. These are...