There has been a lot of turbulence in the telecom space for quite some time now. The unprecedented losses declared by Bharti Airtel and Vodafone Idea in their results posted for the last quarter further established this fact. For the July-September 2019 quarter, Vodafone Idea posted a whopping INR 50,922 crores loss. It is the worst ever quarterly loss posted by any company in India. Bharti Airtel, for the same quarter, posted a loss of INR 23,045 crores.

The huge losses posted have been on account of provisioning for dues related to Adjusted Gross Revenue (AGR) as per the ruling of Supreme Court in this matter.

The Supreme Court ruling referred to a one and a half decade-old case where these companies had sought exclusion of revenues from other non-core activities or operations like rent, dividend income and interest income, sales of assets etc while arriving at the total AGR. The license fee and Spectrum Usage Charge (SUC) are part of this and are calculated as a percentage of AGR. Vodafone Idea set aside INR 25,680 crores as provisions for AGR related dues. Bharti Airtel has set aside INR 28,450 crores for the same.

These losses have been referred to as ‘notional losses’ as yet and have not been classified as ‘operating losses’ as the companies are seeking relief from the government.

Both the companies have also indicated their inability to function as a ‘going concern’ in case they are mandated to pay these dues.

(As per Wikipedia, “Going concern is an accounting term for a company that has the resources needed to continue operating indefinitely until it provides evidence to the contrary. This term also refers to a company’s ability to make enough money to stay afloat or avoid bankruptcy. If a business is not a going concern, it means it’s gone bankrupt and its assets were liquidated ”.)

Does it impact you as a Mutual Fund Investor?

Yes, if you have invested in particular Debt Mutual Fund schemes which have exposure to stressed securities of these companies. 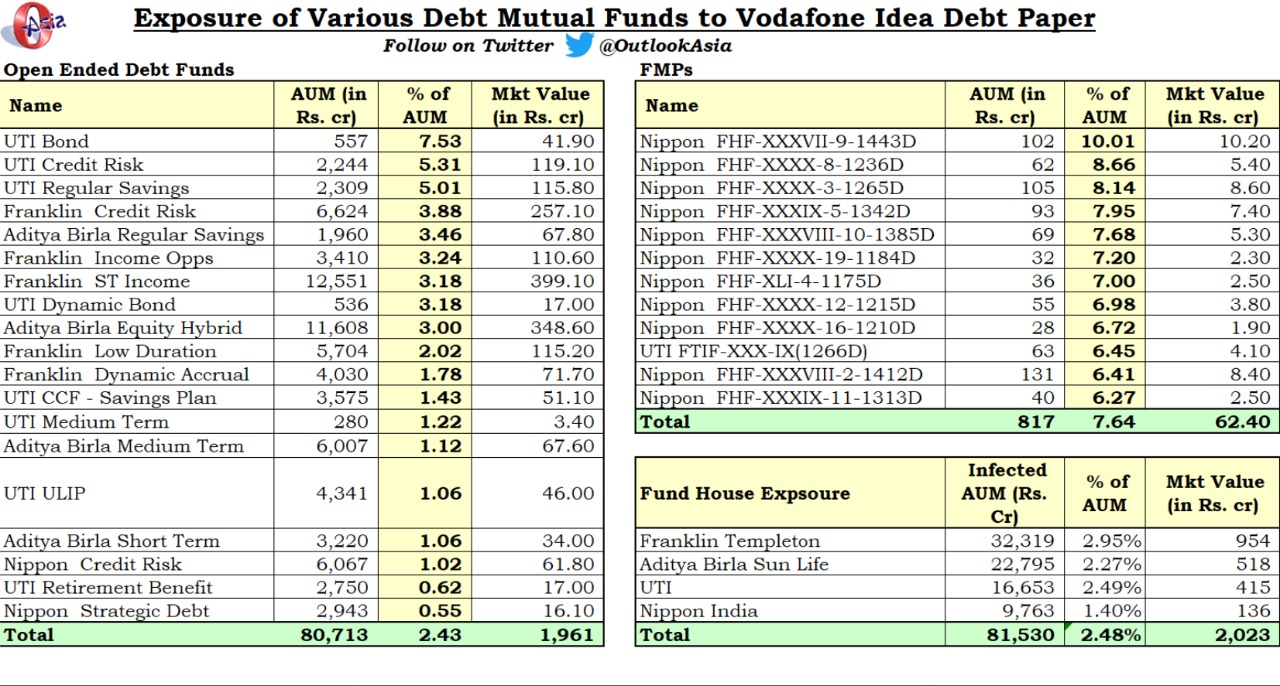 The rating of Vodafone Idea paper still stands at A-  (as rated by Brickwork Ratings last week). However, with these developments, the scenario might change. There has been no default so far and thus no markdown as yet, as most of the stakeholders are on a ‘wait and watch’ mode. Vodafone Idea’s total debt of over INR 99,000 crores has had serious repercussions on its share price as well, which was down to less than INR 3, an almost 95% fall from its stock price two years ago. The company’s owners, India’s Aditya Birla Group and UK’s Vodafone, have ruled out any further capital infusion in the company.

Bharti Airtel has had a significant impact as well, though the street is of the view that it stands to gain from this episode, even if it has to make the entire payment.  Investors foresee gains in the market share for Bharti Airtel in case Vodafone Idea chooses to end its India operations. This is because Airtel’s financial position, otherwise, is quite sound.

Are you a Debt Fund Investor?

As a priority move, check for concentration risk – any exposure of more than 5% should be a cause for concern. A well-diversified scheme would be a better choice.  For understanding and assessing Debt Funds, read more here – Ratings-downgrade-credit-risk-and-assessing-debt-funds/

Budget 2020 measures that affect personal finance and nothing else.   1/ Tax rates - most...

What do you need in your deposit account? We asked our users what they value the most in a...

Our founder and CEO Gaurav (@rustapharian) speaks with Neil Borate of  Mint about the big...